Today we’re having a look at one of the latest creations from the Cooler Master gaming brand CM Storm, a keyboard called Mech. This keyboard features not only the usual keyboard functionality, you will also find a two port USB 3.0 hub, soundcard but also a customizable aluminum plate. 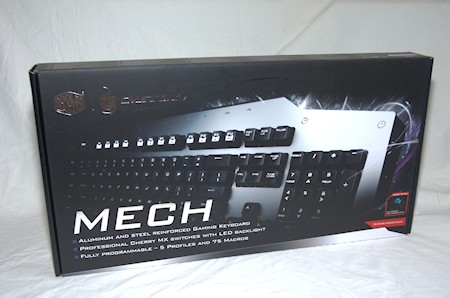 The CM Storm Mech comes in a stylish black box which protects the keyboard very well. All around the package we have information about what we will find on the inside. Information such as Cherry MX Blue switches, which will give us low resistance with force feedback (clicks), the aluminum cover is easily removed with a set of allen-key screws with the enclosed tool.

The Cherry switches is of course covered with the caps, which also can be removed with the enclosed tool if you don’t have that from before. With the tool you can remove every single key, except the Enter key if you have the Pan Nordic keyboard layout, as it is larger than on the US keyboards. 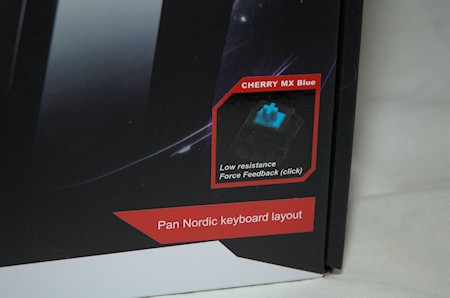 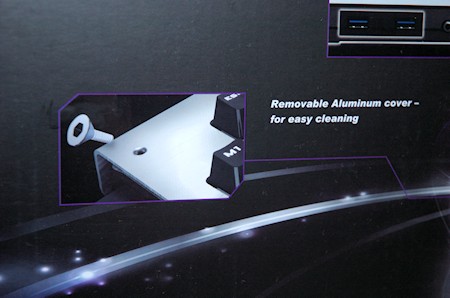 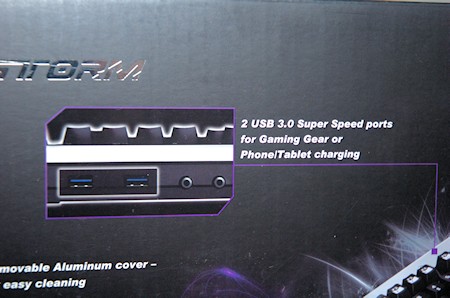 The two USB 3.0 ports can both be used for gaming gear or phone/tablet charging, as well as any other USB peripheral you might need to plug in.

CM Storm Mech is powered by a 32-bit 72MHz processor which is said to be fast enough for the most intricate macros so you can be sure to reload-changeweapon-kill-win in more or less any game available. So the time when you can’t blame the hardware for your fails has finally arrived. 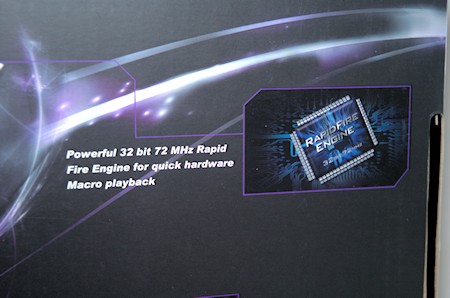 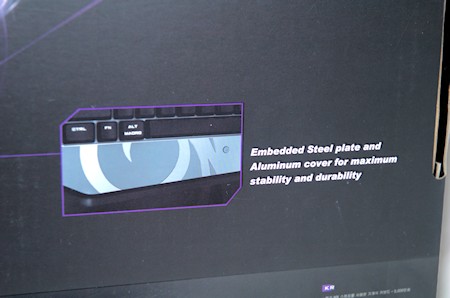 Inside the keyboard there is an embedded steel plate that the aluminum plate is fastened to, which gives the keyboard maximum stability and durability, more on that later on.

When we open up the box we find out that there is a lot of padding and a protective anti-scratch bag around the actual keyboard. The accessories included are a quick cheat-sheet for functions and keys on the keyboard, a user-manual, USB 3.0 cable which is long enough for probably most setups and last but certainly not the least, even if it’s very small, the allen-key and the key-cap tool. 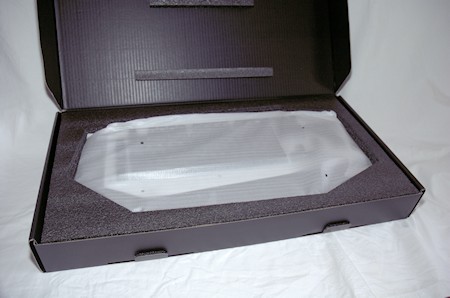 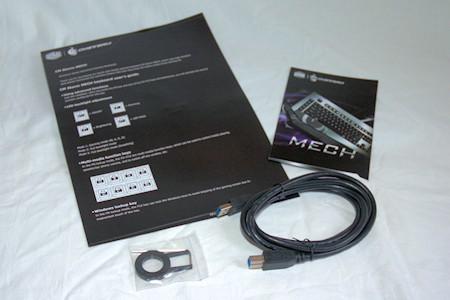 Opening up the protective back we find a very heavy and, in my opinion, a very stylish keyboard with what seems to be a perfect setup of spacing between the keys. The Mech has a built-in hand-rest but also as you can see on the left side a handle which at least on the outside seems to be pure plastic, I have actually no idea if there is any sort of metal inside of it but I hope so. Anyhow the handle seems to be very sturdy so you should be able to carry it around quite easily. 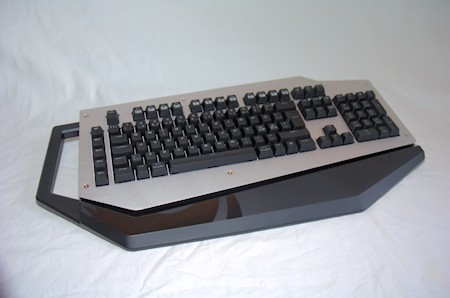 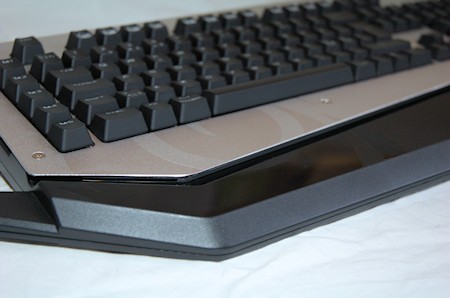 If you look quickly over the keyboard you can’t find any media keys, the only thing out of the ordinary is the five macro keys on the left. But as many manufacturers do, CM has put the media keys on the F(unction) keys. By default you get F1-F12 functions by using the keys, but if you press one of the two FN keys down by the ALT keys you activate the second function which for the first four keys is backlight/keylight on/off, light decrease, light increase and light mode.

The light mode cycles through three different modes, first is all on. Second is gaming mode which lights up the arrow keys, WASD and the macro keys. Third and last mode is a pulsing mode where all lights pulse on and off slowly, excellent and beautiful for showcasing your computer at a LAN event. 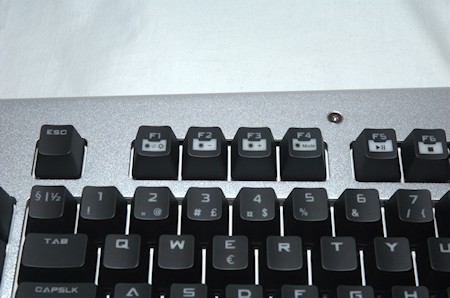 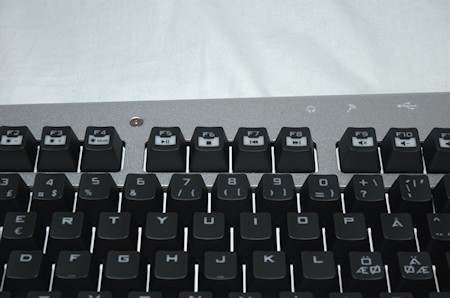 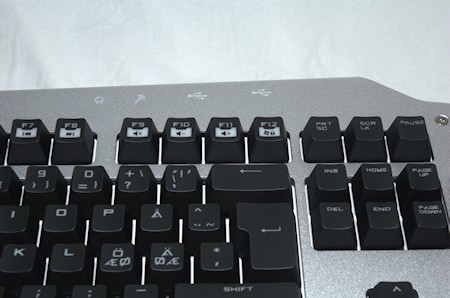 Keys F5 through F11 gives regular media key functionality with play/pause, stop, previous, next, mute, volume down and up. F12 gives the ability to lock the left FN key which when it’s not locked, opens up the Windows start menu. So if you accidentally hit the Windows key while playing, you have the ability to turn that feature off very easily.

Just above the F8 through F12 keys we have the connections for headset sound and microphone as well as the two USB 3.0 ports. As well as the outgoing USB 3.0 master connector for connecting your keyboard to your computer. The Mech also works with USB 2.0 ports if needed. 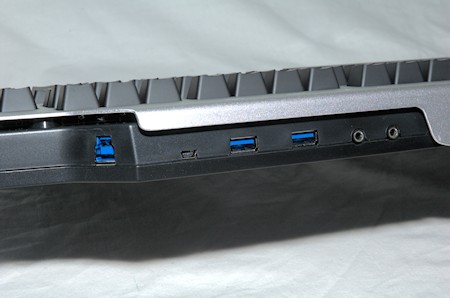 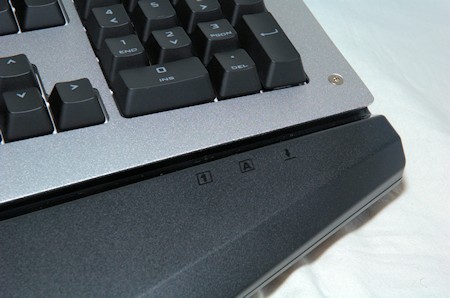 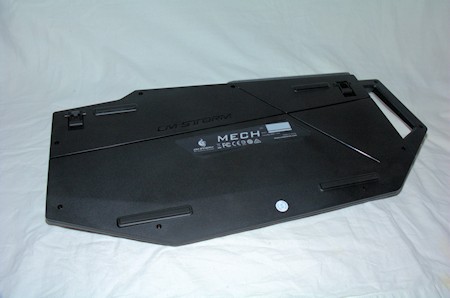 In the bottom right of the keyboard we also find the num-lock, caps-lock and scroll-lock indicators. The bottom side of the keyboard doesn’t give you any goodies, we find the serial number and two extenders to raise your keyboard. 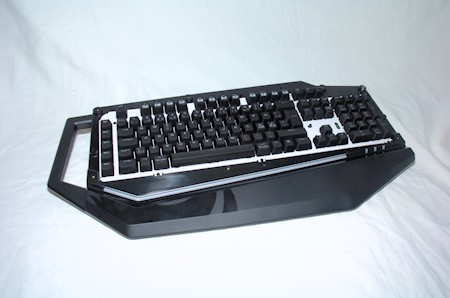 Last but not least, some action-photos. First off we have all keys fully lit and while the photo shows some blur over the keys they are very easy to read in real life. However, at full power they are too bright for my own taste, so I rather step down a notch or two. Second photo is the gaming mode, M1 through M5 is lit, and those are the macro keys, we also get the WASD and arrow keys lit up.

You can also see the F12 button lit up complete. This button is not affected by any of the modes, not even when you turn the light off. If you decide to lock the Windows key you’re stuck with the bright light from the F12 key no matter what, it does however make sure you know that the Windows key is locked ;) 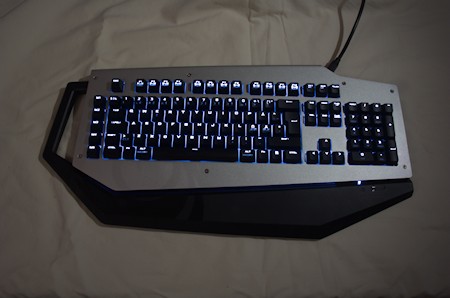 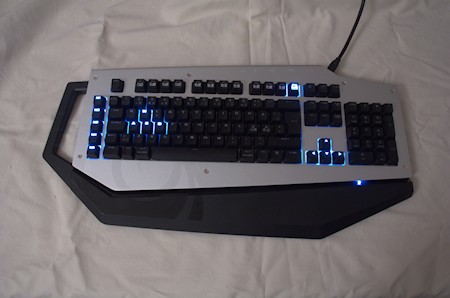 On next page we take a look at the testing results and thoughts of the tester, well of me that is. Head on to find out!