The included USB dongle works on the 2.4GHz wireless band which most probably mean that it has channel hopping features, which equals to - many users can use the same type of headphones without disturbing each other in terms of connectivity. Razer has also made sure that the communication between the headset and your computer is as lag-free as possible. The range is said to be around 12 meters, but after testing it seems to work easily up to 15 meters. Beyond that, the headset loose its connectivity from time to time.

With the high performing 50mm Neodymium magnet drivers you are surely able to crank up the volume on a good level to hear everything in a 7.1 environment game, such as the Battlefield series and other games that feature surround sound. During my tests I found that the bass was a little low, but that was easily fixed with Razer Synapse that controls the functionality of the headset such as EQ, lighting, software updates and more.

As the ManO'War is wireless, it means that the headset features a battery. It is said that you will have about 14 hours of usage out of one charge. It all depends on how high volume you have and if you have the lighting feature on. It won't differ much, but I've found that around 14-22 hours is certainly possible. 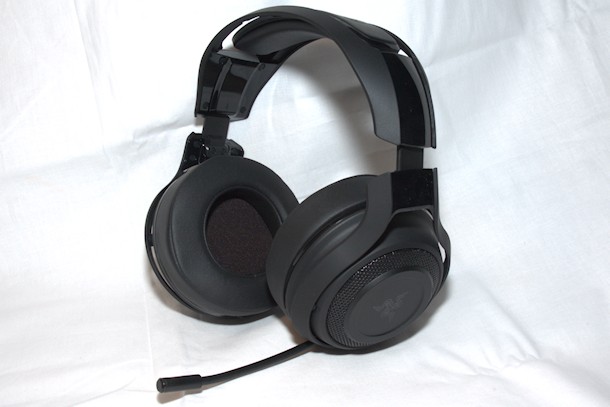 Some deep down specs of the headphones show that the frequency response is between 20Hz and 20kHz. So not the deepest hearable bass, but very close by. The drivers feature a 50mm size and the inner ear cup diameter is 60mm – large enough for my elephant ears!

Finally, the ManO'War is compatible with PC (Win7, Win8, Win10), MAC (OSX 10.9 and higher) and PlayStation 4. However, only stereo sound on the PlayStation.

Testing the ManO'War has been fun, it was easy to install and configure through Razer Synapse. The form and size of the headphones perfectly fit my head and after some tweaking with the bass settings I'm really sold on these headphones.

Are they worth the €199.99 EURO that Razer ask for them? Well if you can find them cheaper, buy them, they are really comfortable and outputs a really nice and great sound, especially for being a gamer headset. For music lovers? Yeah sure, why not! Are there cheaper headphones available? For sure, but if you want a pair of very comfortable headphones with a very big brand name, then you probably won't get away cheaper.

As a comparison, headphones from Corsair is in the same price range and as an example, Steelseries is almost twice as expensive.

For the features and the comfortable fit, I give these headphones a recommended stamp.