Today we're having a look at our first Akasa product for quite some time and this time it is the USB 3.0 multi card reader (AK-CR-08BK).

This card reader comes in a blister package so, as usual, be careful when you open it up. It is however stylish and clearly shows off the product inside. On the package we can see that the reader can handle Compact Flash, Memory Stick, micro SD and regular SD cards with up to UHS-II standards. Thanks to its USB 3.0 compatibility you can get read and write speeds of up to 10 times what you could with the older USB 2.0. 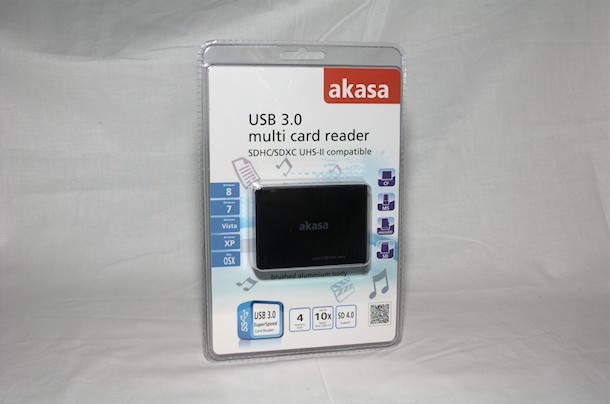 The reader is featured as an USB 3.0 product, but full compatibility exists for 2.0 and 1.1. The maximum speed that the reader can communicate with a computer is 5GB/s but obviously we don't have any memory cards available today that can handle the speed. However, it should hopefully present us with a higher read and write speed than with a regular USB 2.0 reader, which is capable of speeds up to 480MB/s.

Of course, the same memory card should perform more or less identical in a USB 2.0 and this USB 3.0 reader as long as its specifications are below that of the USB 2.0 limits. If this is the case, we'll see in the results in a moment.

With the AK-CR-08BK Akasa presents an external memory card reader, but they do offer more or less the same product but as an internal version as well along several other models. Internal models have their benefits, for example you can't lose the cable so you can't plug it in, but an external reader is very convenient in the way that you can take it with you, just dump it in your camera bag and you're set to upload your photos anywhere you find a computer.

This memory card reader comes with a USB 3.0 cable which seems to be quite durable yet very flexible and a short user manual. No drivers are needed and on Windows 7 and up it installs directly without any need for actions, plug and play in other words. 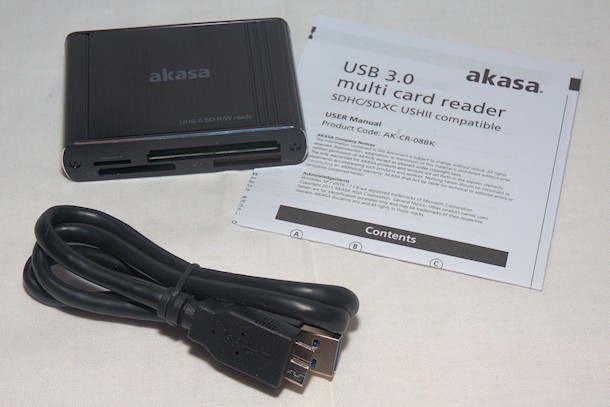 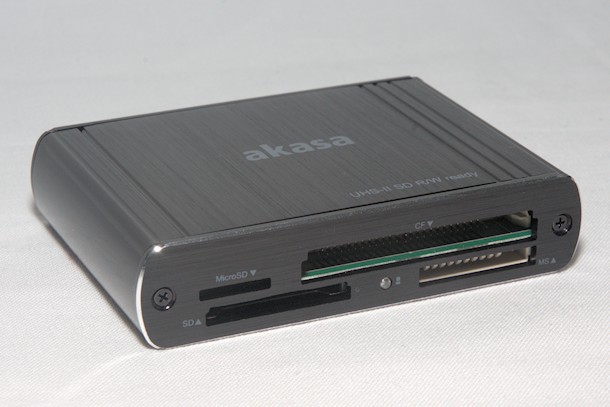 The AK-CR-08BK is very stylish with its brushed aluminum housing and machined openings for the memory card slots. All slots are very easy to access and push the memory card into, except the microSD in which you could, if you hold the card in a too steep angle push up above the slot and lose inside the card reader.

I've been close a couple of times to lose the card inside the reader, but I have since learned how to insert the memory card properly, so now it's no problem at all. There is also a small LED in the middle on the front panel which lights up blue when a memory card is inserted, and blinks when data is read or written.

On the back we only have the USB 3.0 connector and that is pretty much it for this product. 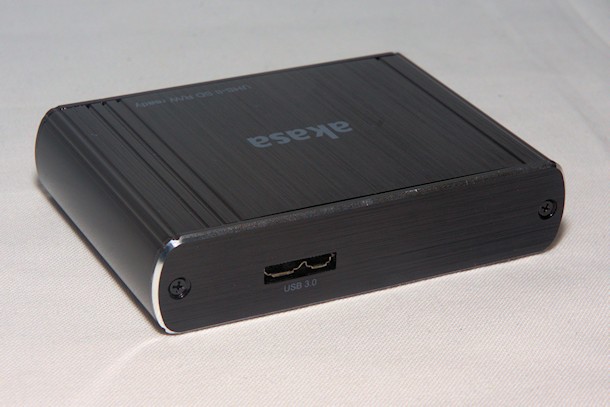 Now, back to the speeds - Of course, we won't be able to achieve 5GB/s speeds anytime soon. However I believe that just by upgrading from your USB 2.0 reader to a USB 3.0 reader, you should theoretically get an increase in read speed.

The reasoning behind this is that a USB 3.0 reader should have a faster processor inside that communicates with your computer and therefore it should be able to transfer data to and from your memory card a little bit quicker.

My tests are made with the AK-CR-08BK from Akasa, a GoPro camera and a generic no-name USB 2.0 memory card reader. Same microSD card is used for all tests, and we're using a Sandisk Extreme 64GB micro SDXC Category 10/UHS (1) memory card.

As you can see the memory card reader from Akasa performs quite well. Even though it is the exact same memory card which in theory is capable of read speeds of up to 80MB/s, it does perform differently in different card readers, and camera for that matter.

The GoPro camera is capable of writing to and reading from the memory card at a much higher speed than what is possible over a USB connection. The limit here is the circuitry inside the camera that goes from the memory card, to a memory reading chip and then perhaps to a USB converter and then into your computer. So, somewhere inside the camera there is a bottleneck, no idea exactly what it may be.

The generic no-name USB 2.0 memory card reader should at least be able to read as quickly as the USB 3.0 reader, however I believe that its bottleneck is the memory card to USB processor is the problem. It is most probably not specced running at 480MB/s or there might be some other unknown problem.

When it comes to the Akasa AK-CR-08BK, I'm not sure to why we don't get a higher speed of around 80MB/s.

I know for a fact that you won't be able to achieve 80MB/s even if the card, reader and computer should be able to handle it, because the tests are made with a bare minimum of components, in this case in the laboratories of Sandisk, where they can achieve the highest possible speed.

However, I'm curious to why we don't see a speed of around 50-60MB/s. I'm not sure, but I believe that this should be possible.

While it is slightly lower, it is not a big deal.

Tests were conducted with saving and reading from an SSD on our test computer, which is capable of much higher read and write speeds and therefore able to handle anything we encounter in these tests.

In the end, there is a huge improvement in read and write speeds compared to both the GoPro camera but also the USB 2.0 memory card reader, which was expected.