Today we're having a look at, well not really a hardware product, but it kind of is hardware as it certainly isn't software. On the bench today I have most probably the thinnest product I've tested so far and it is the LightDims, LED dimming stickers.

When I first came in contact with the product, which actually was this year and by now these products have been out on the market for three years, I was thinking; This is what I need!

Jason and his family, behind the LightDims, were kind enough to send over some samples to try out. The LightDims comes in a wide variety of sizes and one package is chock full of them. There are a couple of different options to choose from, ranging from the "sunglasses" (also known as the original strength) which blocks 50-80% of the light. 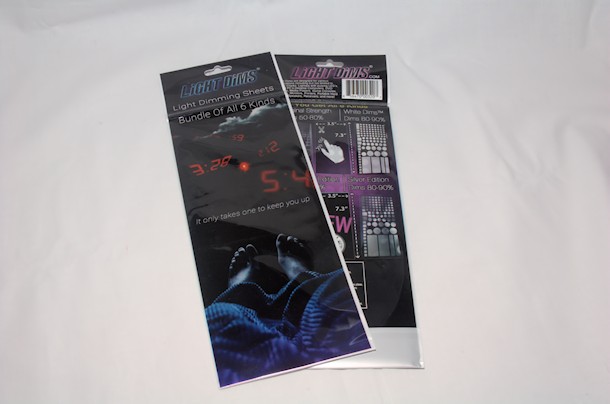 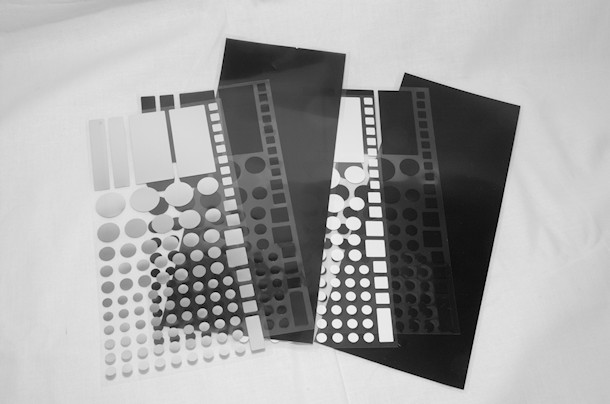 Then there are different variations, we have the silver edition which is of course silver and also blocks around 50-80% of the light from an LED. Then we have the Black Out and White which completely blocks the light. These all comes in pre-cut shapes from round to rectangular and squares with rounded corners, all in different sizes.

If that's not enough they also offer a gigantic sheet, in comparison, which are meant for you to cut to size to fit pretty much anything that you want dimmed.

The silver, white and black versions are really great for all sorts of applications. I remember a few years ago, or many years actually. TV's only came in color black and if you for some strange reason would want a silver or even more luxurious a white variant, you would have to pay like 20-30% more in price just because they were so different. Today completely the opposite as all our appliances and electronics comes in so many different colors that Jason could probably spend the rest of his life coming up with new colors for LightDims! I don't think we need that many though ;)

"Jason Michael Hampton Invented LightDims aka Light Dims out of necessity because of the side effects he experienced from Lasik Eye Surgery. Jason also worked in dark edit bays and offices around large amounts of electronics. Over the years Jason Hampton realized that ubiquitously, LED's were in all homes and offices causing people pain and irritation or loss of sleep just as he had experienced. Jason searched for a solution that was both practical and aesthetically pleasing but after searching he realized he would have to create this product himself because it did not exist yet."

Personally I've found that bright light, any sort these days, brings me great headaches and I often get migraine just from being outdoors without a pair of sunglasses when the sun is out. It is very difficult for me and it affects my mood in a very negative way. However, thanks to sunglasses I can be out and enjoy the fresh air and even the sun.

Indoors however, sunglasses aren't the best. If and when I do get a migraine when I'm inside, I can use sunglasses but it often makes the environment very dark so when the migraine goes away, I'm kind of getting the opposite effect and getting a headache because of too little light coming into my eyes. Strange, but I do experience it ;)

TV's and screens I can dim down to a comfortable level, but there are some things that are quite hard to dim, such as LED's. LED/LCD/VFD clocks are another example. They most often tend to be very bright and of course, why would there be a dimming function on these products?

So what do I want to dim and what do I need to dim? Well, as you get over a 100 LightDims stickers in one package you can dim pretty much any LED in your home as you will have plenty of these over when you're done. Unless, you live in some sort of war bunker with all sort of gizmos installed with hundreds of lights! But then, just buy another pack or two and you'll be covered.

There is one very important LED light that I wanted to dim, but let's take that one later on. First off I looked around and I thought, maybe I could try a flashlight which I know is very bright and when fully charged is quite unpleasant to look straight into, which of course you never should do anyway.

So I found the flashlight and on the photos it is of course not as bright as it is in real life. However, it is a good practice of taking photos of a light and then dimming it with something. Because when you want to take a photo with lights you have to setup your camera to the correct shutter speed and aperture and all such. This time however, to show you the effect of the LightDims I need to set the aperture and shutter speed to a fixed setting and use that throughout the photoshoot just to make sure that we get to see the difference.

Because if I don't, the camera will automatically adjust to show the light with the same amount of brightness on both the before and after photo. 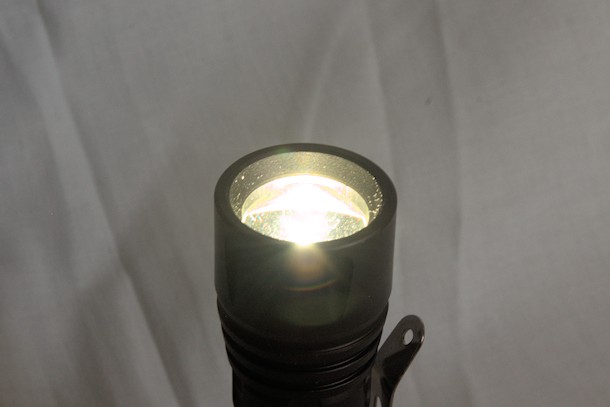 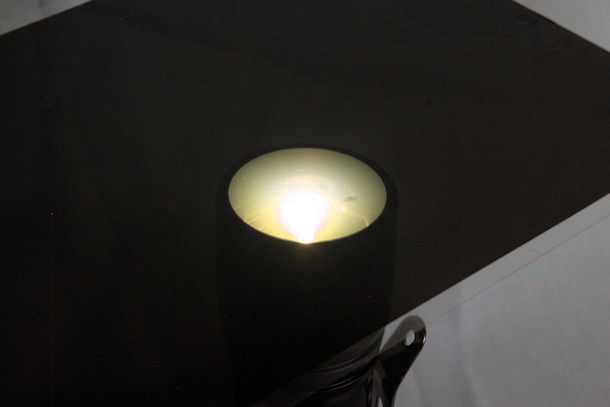 Anyhow, the flashlight of course is not as bright as in real life, but you can easily see the difference. The LightDims easily gets rid of the halo and dims the light quite a lot, while still letting 20-50% of the light through. For this bright light I'm sure that the LightDims struggles with dimming the light and we're probably close to around 50% dimming. At this point I have no way of measuring the difference, but I can honestly say that they are doing one hell of a job!

Further I found the remote for the air cooling fan that I had lying on the desk. Perfect, it has a bright blue LED.

Of course, I'm not supposed to press any of the buttons constantly for an extended period of time, but it is an easy test to see what to expect. The result was quite amazing. 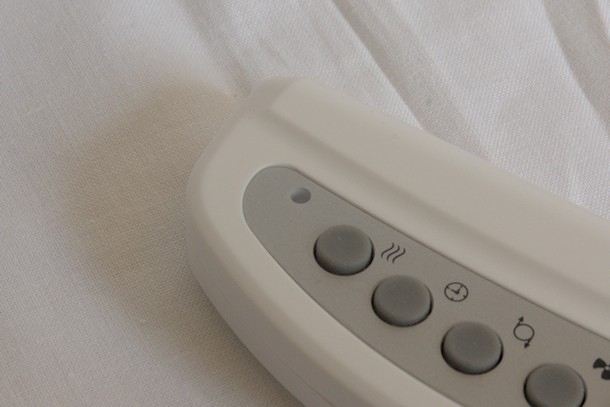 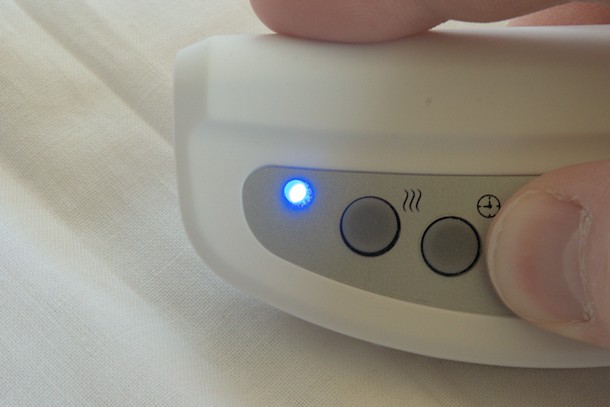 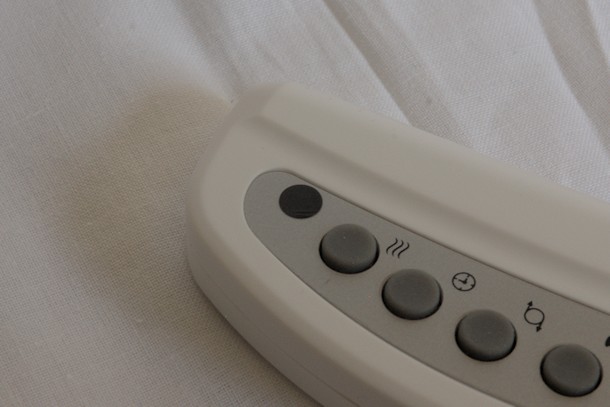 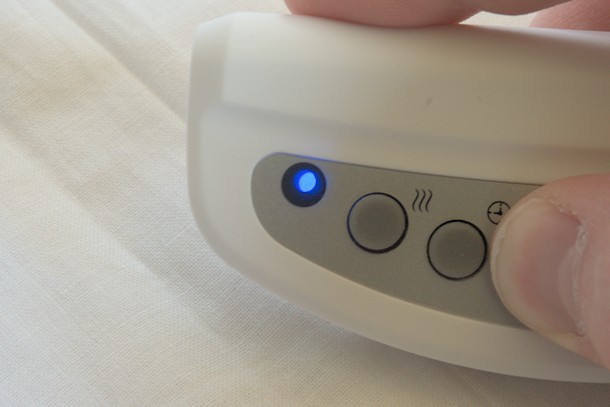 Now, on to more useful tests.

Recently we reviewed the Netgear RN212, a network attached storage unit which featured extremely bright LED's. I don't know if Netgear is driving these bad boys extremely hard or if they've chosen the strongest LED's because they are the coolest – no idea! They look awesome though.

But, with these extremely bright lights it is kind of hard to think of anything else if they are shining towards you, even a meter or two away. So I thought, these would be great to try out the LightDims on.

The before and after photos does show the incredible result. I can't see them anymore! Well, if I want to see them, just look at them and I'll see if they're lit up or blinking or whatever, but I don't get distracted by them anymore when not looking at them. 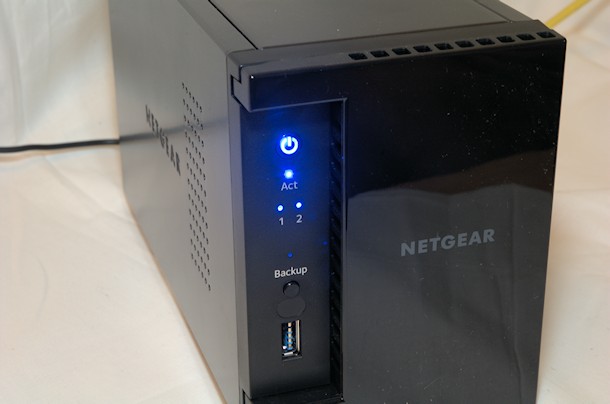 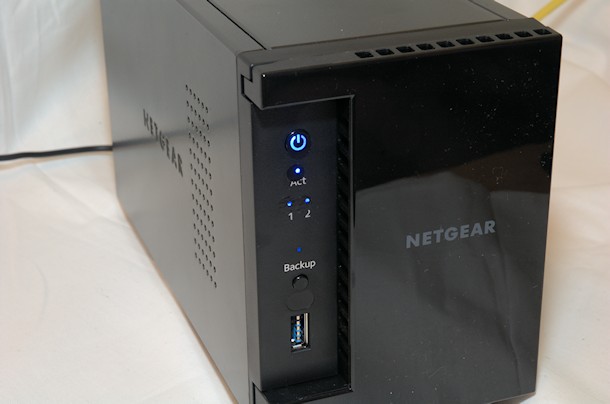 Of course, that is a product that certainly needs dimming. But the most annoying product at home is the HD DVR for our TV. For some reason, Samsung thought that it would be an awesome idea with a super bright VFD display and sure, I love it.

It shows the clock all the time and shows which channel or program you're watching at the moment. It is bright, which also is a big plus – cause you can easily see the display from a distance. 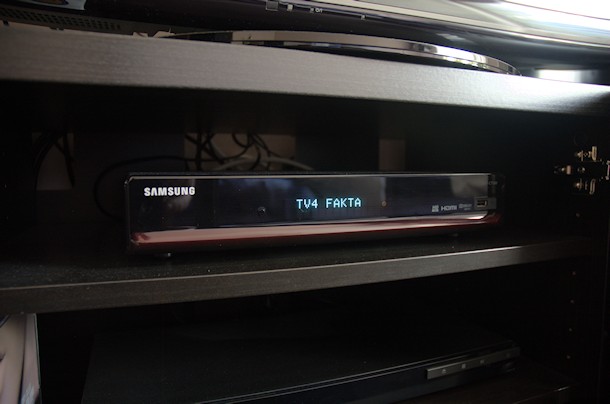 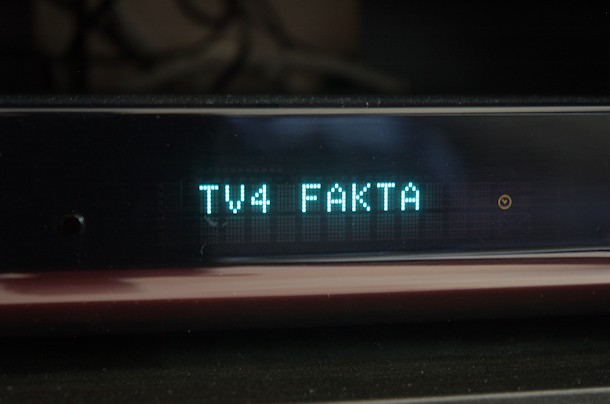 However, having this box in the bedroom, turning off all lights to make the room dark like when you do want to sleep, in a bedroom.. I guess you know the situation, right? Well, at that point you don't want a whole landing strip for airplanes to light up your room.

This also happened, one or two years ago, because before that in the firmware for the DVR there was this setting to dim the lights when you turn off the box. I mean, I don't need to have the display as bright when the box is turned off, but sure I want to see the clock still.

But, after an update to the box, they removed that feature and replaced it with.. You can either have it incredibly bright or not on at all. Just because they gave you the feature of putting the whole box in a deep standby mode.

COME ON GUYS!? Sure, a deep standby is great, draws less power and all that "important" stuff. But the clock goes away, unless you want it at full brightness.

So, finally Jason invents these LightDims and he forgets to tell me about them, until now. I've found them!

When checking the sheet of stickers I found that none of the precut LightDims fit the display of the HD DVR. Hmm, let's bring out the gigantic sheet! Said and done, I cut a rectangle which of course, is not the prettiest thing but hey, it does its job.

Very easy to cut and get off the protective backing, very easy to apply and just wow! The result is purely amazing. 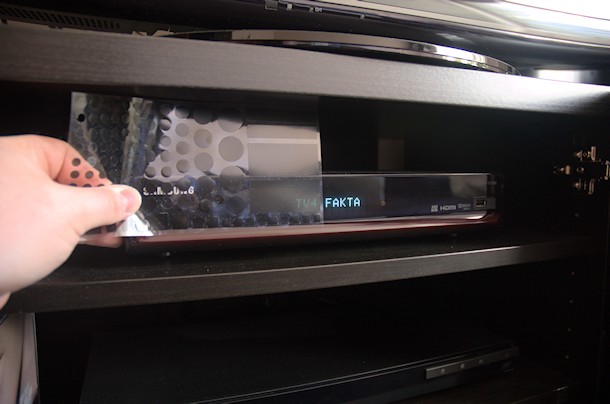 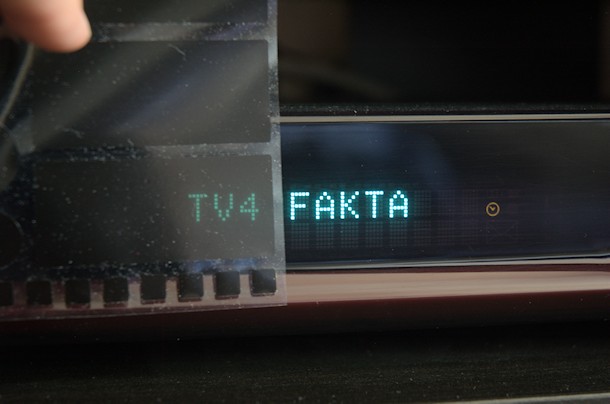 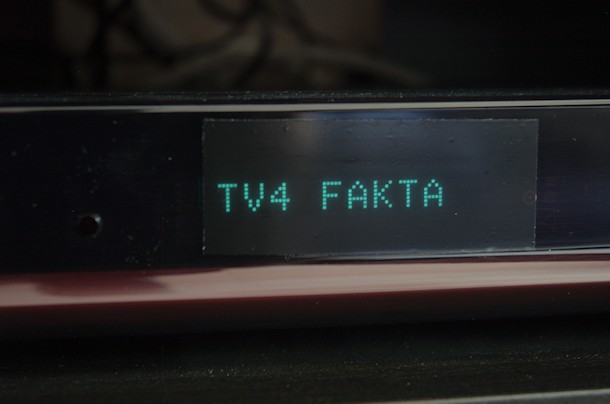 Not many, if any really.. has blown my mind so hard that this product did. Not only is it extremely simple, why haven't anyone else thought of this before? Just incredibly strange!

But not only is it simple, it is very easy to use and apply. The result is, for someone like Jason, me or anyone else who suffers from the effects of bright light, just amazing!

For the price that Jason offers these, they are just a bargain not only in the USA where Jason sells them from, but for all over the world thanks to very low flat rate shipping. Much like the Chinese and their shipping rates, I can't understand how it's possible!

Finally I would like to thank Jason over at LightDims.com for sending over the samples.

Be sure to visit the site where you can buy these and find distributors in your area at http://lightdims.com