On our test bench today we have the ISKU keyboard from Roccat, a company well known for its gaming products. The ISKU is a gaming keyboard with lots more features than your standard keyboard wouldn't even dream about.

Some of the features on the ISKU keyboard that might be interesting is the obvious blue backlit keys, Easyshift[+], 36 macro keys, media keys and a built-in non-removable wrist rest. 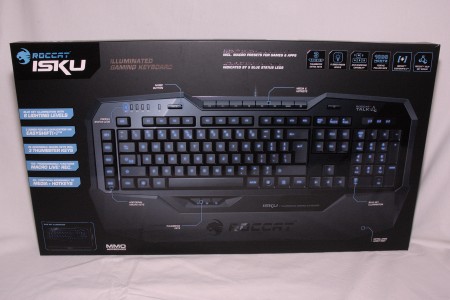 The ISKU comes in a stylish box showing off the keyboard and it's features. We find that we have 6 levels of lighting for the backlit keys, we have the Easyshift[+] function for some sort of key duplication, 36 accessible macro keys with 3 thumbster keys, over 180 programmable functions and over 25 functions assignable to media and hotkeys.

Furthermore we find that the ISKU features anti-ghosting and the polling rate is specced at 1000Hz which should give rapid response on any keypress. Finally there's something called Roccat Talk which actually is a rather neat feature. 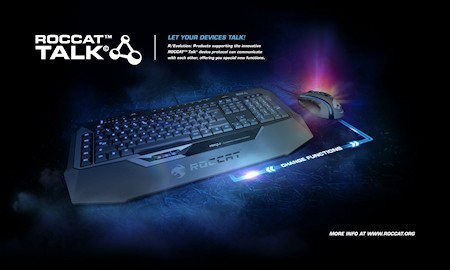 With the Roccat Talk the keyboard can communicate and "talk" with other Roccat products such as the Kone[+] that we have on our test bench as well. This means that you can easily change functions with the macro keys, hotkeys or with the thumbster keys both on your keyboard but also on your mouse at the same time.

This can be very useful for games, so when you start up a game both the keyboard and the mouse change their profiles to match the game, so you can easily use other functions in game than with other keyboards and mice.

Unpacking the keyboard reveals the keyboard itself but also a quick installation guide as well as a CD with drivers. It is however recommended to download the latest driver software from the homepage of Roccat as they are very good at updating their software. You can also upgrade the firmware inside your keyboard, but we'll talk about that later on. 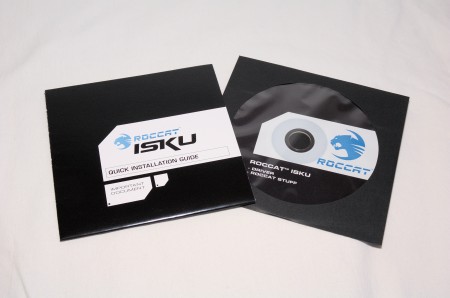 Alright, let's have a look at the keyboard itself. My first glance at it was, it's kind of.. dark, black and.. big. Oh boy I was wrong! The ISKU features so much more than just being dark, black and well, not really that big.

First off we have a look at the thumbster keys that are ideally located just below the spacebar, easily accessed by both your thumbs. 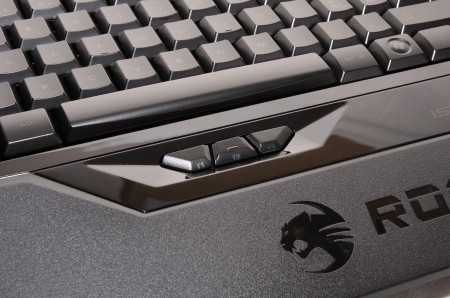 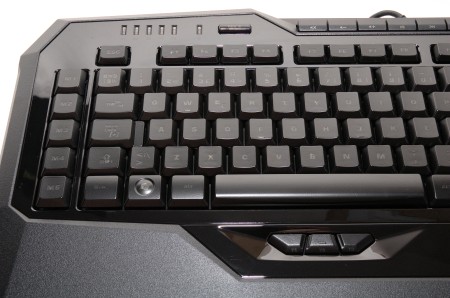 Next up we have a look at the left part of the keyboard, here we find from left to right, the M keys. They are numbered from 1 through 5 and these are the macro keys. The macro keys can be programmed on the fly by the REC button at the top of the keyboard, on the fly, which means you don't have to open up the control program for the keyboard. We'll go through that process a bit later on as well.

To the left of the REC key in the top of the keyboard there are a total of 6 LEDs. 5 LEDs, one for each of the profiles you can set and one LED to notify you that the REC mode for macro creation is on. 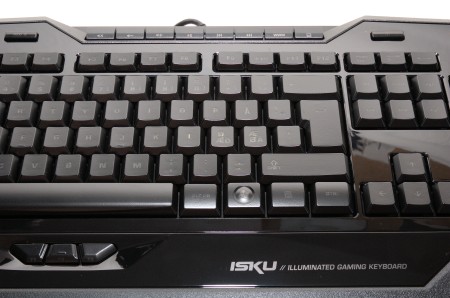 Contiuing to the right in the top we find the media keys; mute, volume -, volume +, play/pause, skip backward, skip forward, browser key and the "My computer" key. These are of course changeable to anything you want, within the control software. Looking further to the right we see a lonely button, this is the light button which controls the light intensity for the key backlight, in a total of six steps. Off, level 1, 2, 3, 4 and 5.

My favorite feature in this picture is the "enter" key, full size!

Final part of the keyboard is of course the right side and here we find enough space around the edit keys (insert, delete, home, end, pgup and pgdn) and the arrow keys. Finally the numpad which is the same size as pretty much any other keyboard with all its features available. 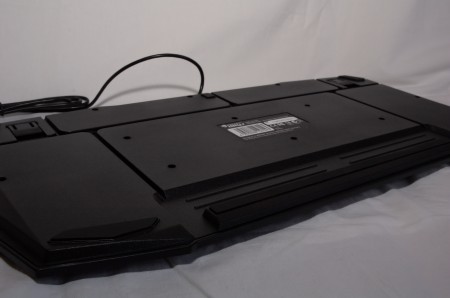 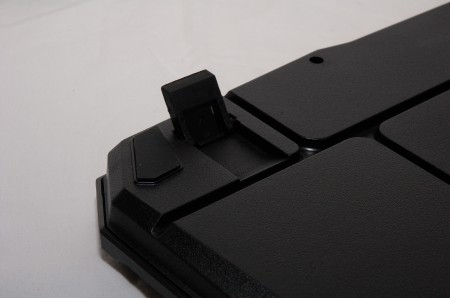 On the underside of the keyboard Roccat has implemented easy routing path for the keyboard cable to make the cabling on your desk much neater. Great idea!

We also find the feet for the keyboard which both is the rubber pads as we can see in the corner but also the extendable feet which heighten the back of the keyboard like you can do on most keyboards.

One final feature I would like to show off is the actual USB connector. Here we have the Roccat name and logo but also the keyboard name, ISKU. This simplifies disconnection of the keyboard in case you need it sometime, especially if you have a computer with loads of cables connected and the computer is tucked in under your desk with very low or non-existing lighting available.

At this point you're going to love the marking on the USB connector! 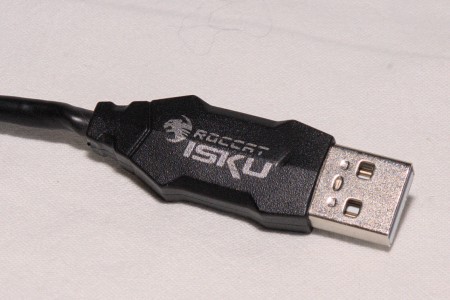 So, it's finally time to hook this keyboard into its host, and now we see the whole beauty in action. 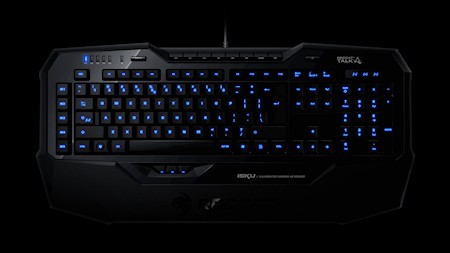 The color of the backlight is very soft blue, the brightness at its highest level is more than enough even in daylight. Some keys are obviously not as well lit because there is so much less transparent material to light up.

As you can imagine I've used the marketing image of the ISKU keyboard as it clearly shows how the keyboard should look like in the dark.

That surely is an ideal image and I can tell you, it doesn't shine That bright, however it is bright enough in every possible way. The only time you might not be able to see which key is which is if you turn the backlight off completely and you don't really have to do that if you don't want to ;)

In any way, the ISKU looks amazing! 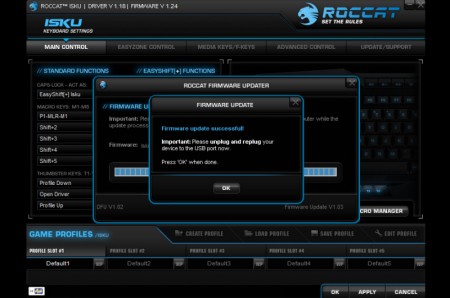 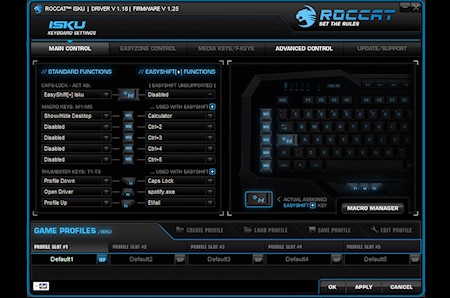 So, why isn't the caps-lock key assigned to do what it is supposed to do? Well that is because it is part of the EasyShift system which gives both your macro keys a second function, but also the thumbkeys. 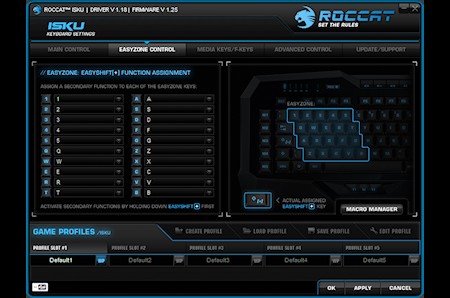 Well what good can that do? For example, you can choose a game-specific macro, you can quick start an application (.exe file), you can assign a key macro such as CTRL-ALT-F4, but you can also assign a program macro for everyday applications such as Firefox, Photoshop, Office, Skype and much more.. Even specific Windows functions.

But best of all, you can record your own macro which is based on keystrokes, with or without pauses recorded between the keypresses. So you can for example code a spam-message and sit in the trade channel in World of Warcraft and click just one button to spam the trade channel with the same message over and over. Well bad example, both because you shouldn't do that and there's also a possibility to do that with in game macros already.

But if you've used a macro in for example World of Warcraft, you will understand what I'm talking about for the macro function in the ISKU control center. 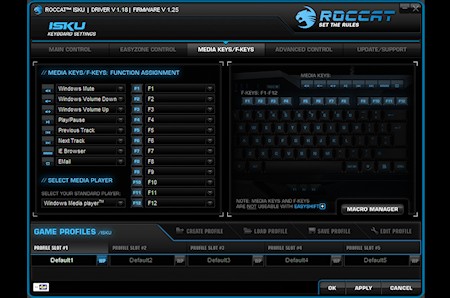 Still there's a lot more to go through in the control center. We have the media keys and the really old and well known Function keys (F1-F12). These are unfortunately not compatible with the EasyShift feature, at least not yet.

They can however be reprogrammed for a lot of other tasks if you would like. Everything from shutting down your computer, to launching a program and even a key macro. However, you can't assign the game-like key macros where you can record lots of keystrokes, only CTRL-ALT-F4 like.

At some point, probably in a coming update you will be able to use the regular, game-like, macros on the function and media keys as well. If not, just bug Roccat on their support forums ;)

Next we have the advanced control, here we can change loads of additional settings. From character repeat and repeat delay to key illumination (level 1-5), key illumination dimmer/timeout so the leds turn off after a certain time and you can also enable/disable sound for profile switching and when you start the macro live recording feature. 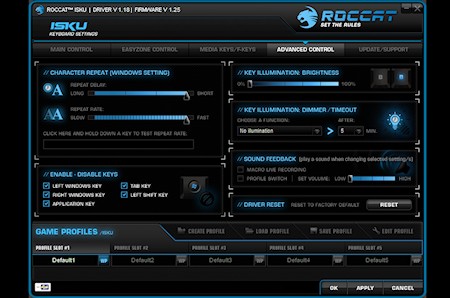 The best feature of this page is probably the enable/disable keys for left and right Windows keys, the application key, tab and left shift key. If you happen to press for example the Windows key while playing games, this feature is excellent! If the game gets stuck you can't press the Windows key though, but then we have CTRL-ESC which works just as well ;)

Last but not least, we have the Update/Support tab on which you have an easy accessible button to download the latest driver and firmware but also a button for Online Support. 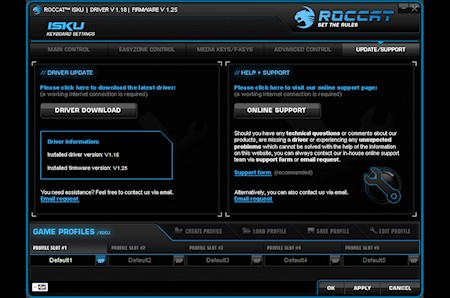 That is pretty much it. Well, let's test this keyboard out. Alright, so I've been testing this keyboard for some time and at first it was really, and I mean really, difficult for me to get used to having the Macro keys to the left on the keyboard, I couldn't adjust my hands to have them more center on. When I finally managed to get used to that, it was time for some testing.

The Roccat ISKU is not a mechanical keyboard, it is more soft-touch and that is exactly what I personally like. What you guys think and like is up to you, but I'm not much for the mechanical versions.

The overall design of the ISKU is great, spacing is perfect between the right CTRL key, the arrow keys and the numpad 0 key. The "Enter" key is the exact perfect size that I'm used to and like. There are the usual media keys present and it has backlit keys that you can turn off if you'd like.

Response times are just perfect and the whole idea that Roccat has placed inside this keyboard while designing it is amazing. There is so much customization without being overwhelming and intrusive so, once you get used to using the extra macro keys and perhaps add something to the EasyShift keys, you will love the ISKU and you won't be able to go away from it.

The keyboard I've used for my personal computer for, years.. is the Logitech Internet Navigator, the white one. What a pleasure it has been, but as it is no longer available in a new package I might have to look for a replacement soon and the Roccat ISKU might be a candidate.

Alright, so what do I think about the Roccat ISKU, just final words. Well I love it, it looks great, feels great and it performs awesome both with just its standard features but even more so with the added functions through macros and the like.

I can't do anything else than recommend this great piece of hardware.