Today we’re having a look at another product from Corsair, namely the Vengeance C70. This new case comes in three colors, one of which we have on the testbench today, the military green.

The Vengeance C70 certainly looks like a military product of some sort with its stylish and precise design. This new line of products launched by Corsair is primarily aimed at gamers and most probably those who love games like Battlefield and other counter-terrorist games such as Counter Strike and the like.

The C70 comes in a dull brown packaging, but as soon as we open up the package we get the first glimpses of the green color and it certainly feels like we’ve got something special this time. 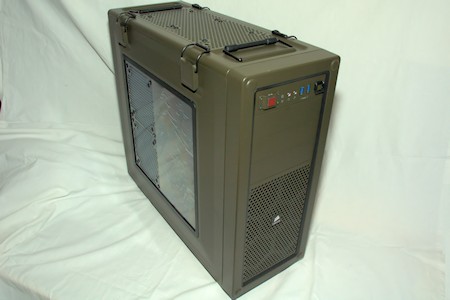 What we have on the testbench is a gaming specced computer case in the mid-tower category. The main goal with this case for Corsair was to aim for LAN party dominance, which I believe they should win quite easily.

It has a durable steel construction and it feels rigid. Both sides are easily removed by easy to use hinges. The front features a large air intake with space for two 120mm fans on the inside. They are however not installed, not directly. We’ll look at that later on.

Furthermore we find two USB 3.0 connectors up top along with headphone and mic connections. These aren’t the most interesting however. What I’m looking at are the power and reset buttons that certainly has their own unique look never before seen on a manufacturer computer case. 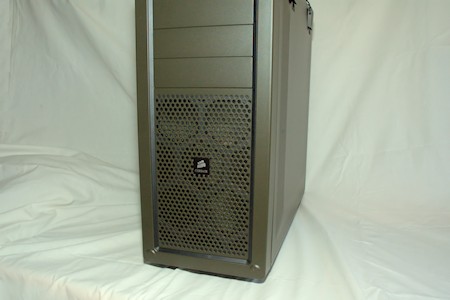 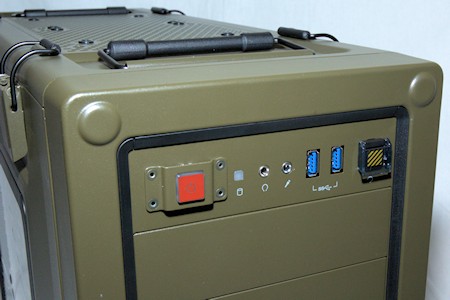 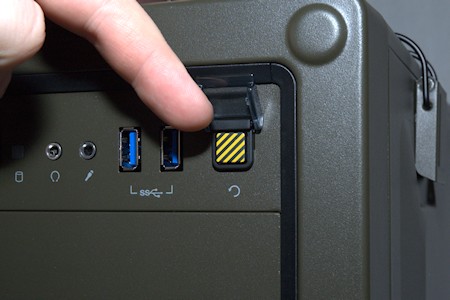 The power button stands out with a plastic button through a steel construction, and I can say that even if it stands out you won’t likely hit it on mistake because you need to press more than on any regular button to get a response, which is good for sure. The reset button has received a “missile fire” like design with a cover that you need to pull up before you can hit the button.

Excellent feature! Why haven’t we got this on more cases out there? It doesn’t matter if other cases are designed to be military armor/ammo crates or not, having that extra security over the reset button surely is great.

Another quite unique feature, this has been seen on other computer cases as well but not in this style, are the handles up on top of the case. Sturdy and most probably very strong are the thoughts that come to my mind. They will surely handle a full case packed with water cooling, several graphic cards, multiple disk drives and a powerful power supply.

Looking further around the left side of the case we find a window with air intakes for another two 120 or 140mm fans. The window is tinted to make sure your enemies won’t see too much of your powerful hardware. 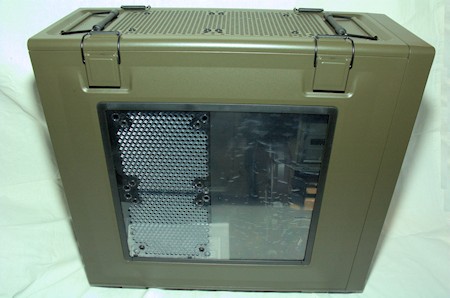 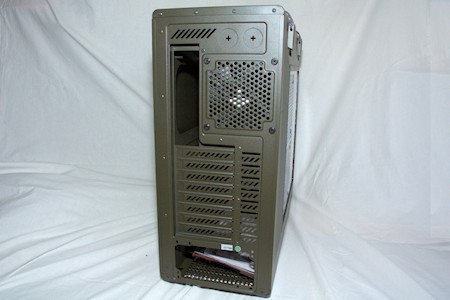 Turning the case around and having a look at the back reveals nothing special. We can see that the power supply should be placed in the bottom of the case, we got a 120mm fan grill with an installed fan and we got a total of 8 expansion slots. The only thing different to other cases here is that there are no screws for the side panels. Big plus!


Having a look behind the front panel reveals space for two additional 120mm fans which aren’t installed by default. These fans have their spot just in front of the cage for the disk drives, which by the way are made for both 3.5” inch disk drives, but also have mounting options in every drive bay for 2.5” drives, such as SSD. 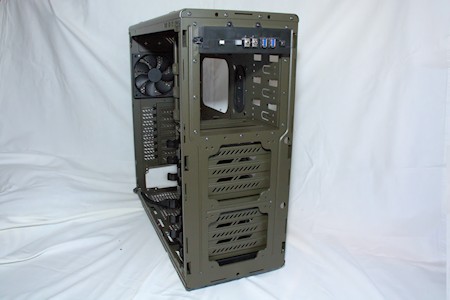 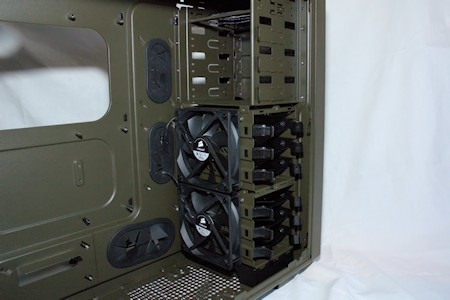 If we take a look on the opposite side of the drive cage we find two fans. So the front fans aren’t installed directly in the front of the case but rather on the inside of the drive cage. This surely makes it possible to draw air more freely over the drives from all holes up front instead of just from a select number of holes in direct contact with the fans.

The only thing I miss with the drive cage in this case is a hot-plug feature which surely should have been installed in a military styled case.

In the bottom of the case we have a lot of holes, all of them covered with dust filters on the outside of the case. These filters are however very flimsy and they won’t remain still under the case, which is the first minus on this case. 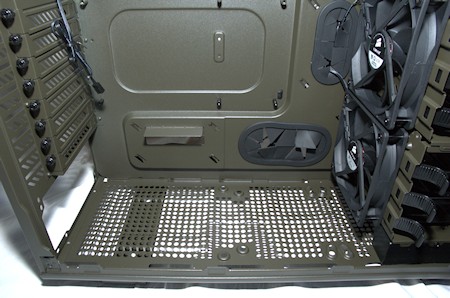 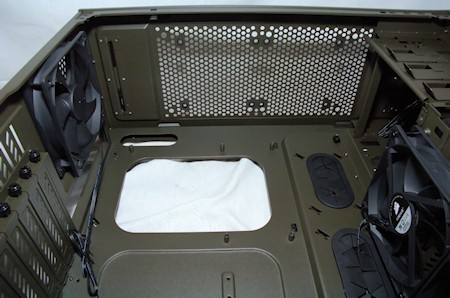 If you remove the bottom part of the drive cage you can install a full 240mm watercooling radiator, which surely is great because if we take a look in the top, there is also space for another radiator up there. This would enable you to run one watercooling loop for the CPU and chipset while you have another loop for your graphic card(s).

There are so many features in such a cramped space!

But, it’s not really cramped because you can easily fit graphic cards with a length up to 320mm. Spacy!

With all the expansion slots featured in this case and all the space for water cooling, we can expect a case that easily can cool really powerful systems. We’re able to fit a total of 10 fans.

Other features we haven’t covered yet are three 5.25 inch drive bays with easy drive installation by simply pulling a metal piece to unlock the drives. Easy and well working! The disk drive cages are of course both removable but they also support both 3.5” and 2.5” drives with a total of six drives. There is also a dust filter behind the front panel.

As always when we test a computer case we nervously search for sharp edges, luckily I can say that I can’t find any! There are also well working rubber grommets covering the cable holes in the motherboard tray, which as usual isn’t removable. 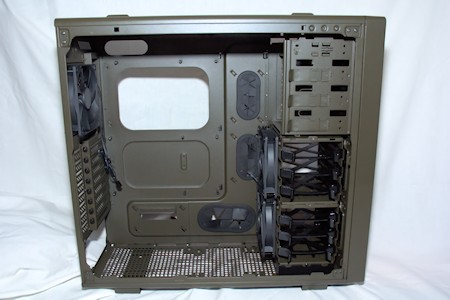 The overall feeling of the Vengeance C70 is that it is a sturdy and stable computer case, more than enough well suited for LAN parties with the ease of moving thanks to the well-built handles on top of the case. The only minus I could find are the flimsy dust filters at the bottom of the case, but other than that I can’t say anything else than I really recommend this computer case.

It looks great, it works great and should come in handy for most gamers around the world. With a price around 110 Euro / 135 USD or 1000 SEK this case surely is a great deal for a new computer system.