Today we're having a look at another computer case and this time it is the Carbide 500R from Corsair, which feature a beautiful white finish for its mid-tower size.

It is based on the Carbide 400R computer case but with even more and better features. It features outrageous cooling potential with the four included fans, 3x 120mm and one 200mm on the side. Furthermore you can install six more fans and it also has integrated support for 240mm liquid-cooling solutions.

One of which is the Hydro Series H100 which is also being offered by Corsair.

To increase the airflow over your graphics card you can also remove disk drive cages which also make it possible to install graphics cards which are up to 452mm in length.

On the right side of the case, behind the side panel there is also a large cutout around the CPU area which makes it trivial to install a new CPU cooler without remove the motherboard from the case. Something that is more or less standard today in most cases, which is great!

Finally, the front panel includes USB 3.0, headphone and mic connections as well as a multi-channel fan controller and an LED on/off switch for both the front 120mm fans and the 200mm side panel fan.

Lots of features for sure, let's take a look at the case itself.

We've received the white version of the Carbide 500R which surely is the best version; I've never seen white looking this good. 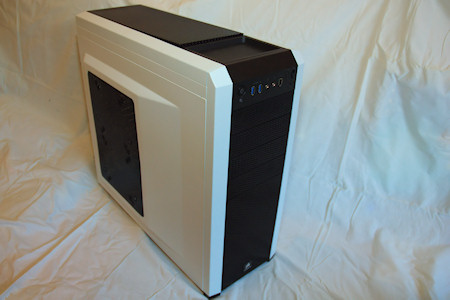 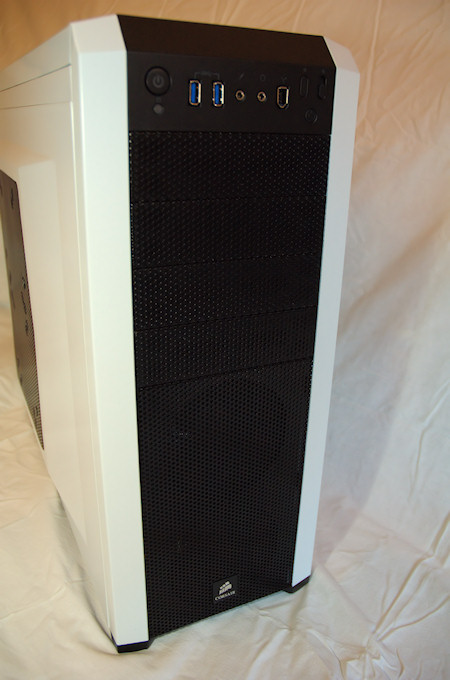 The front of the case is one plain design with a mesh style fan filter. On the inside of the lower part there is actually a metal filter in front of the fans, but it's quite difficult to remove if you'd like and it's probably not the intention by Corsair.

However, after using the case and letting it do its thing as a vacuum cleaner it seems that most dust is easily removable by just vacuuming with a real vacuum cleaner on the front. Up by the 5.25 inch slots there is actually a foamy filter which can be removed if needed, which hopefully is something you don't have to do as you probably don't have any fans up there in the front. 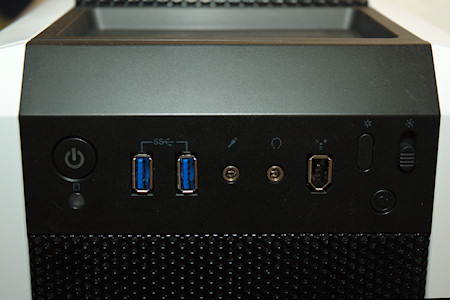 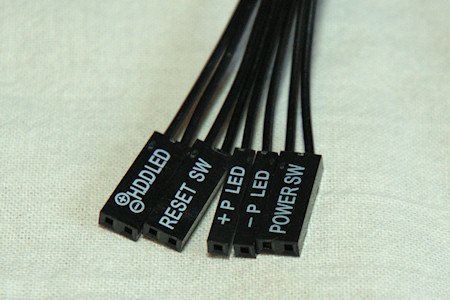 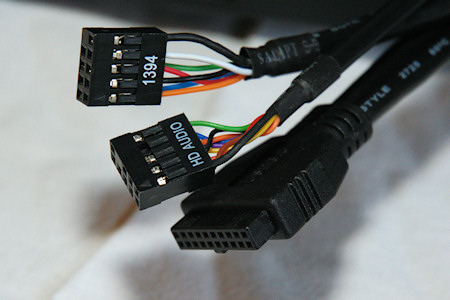 As said earlier, the front-panel have the USB 3.0 ports, headphone and mic connections as well as a LED on/off and a fan-speed controller. We also find the much needed power and reset buttons but also a 1394 firewire connection.

The cables for the front-panel are well marked and easy to use.

To top off the front, Corsair has placed a metal case badge in the bottom center. Good looking for sure! Behind the case badge there are also two 120mm white-led quiet fans. 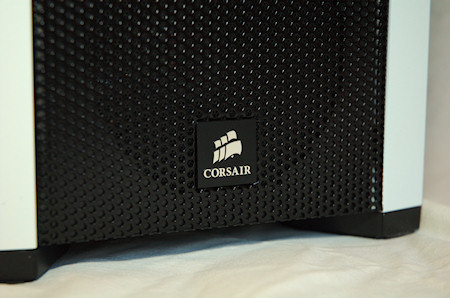 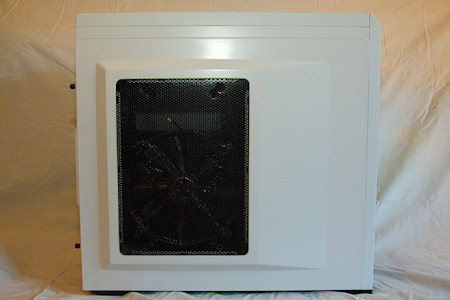 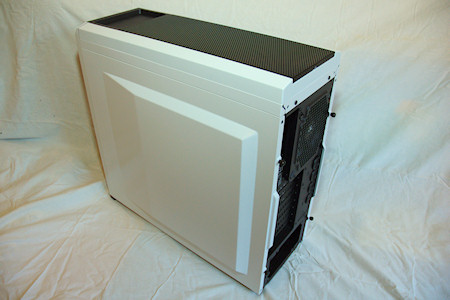 The left side panel features a mesh filter panel where the 200mm fan is also fitted, which by the way also is fitted with white leds.

Spinning the case around and looking at the right side shows a normal plain side with no direct details.

If we jump up on top of the case we first find a rubber storage up front and behind that we have another mesh panel, this one is fitted with a push-push mechanism to lock/unlock it as it can be removed for easy access to installing the top fans. Here we can either install two 120mm or 140mm fans.

The first solution is what we use in our installed testing rig. 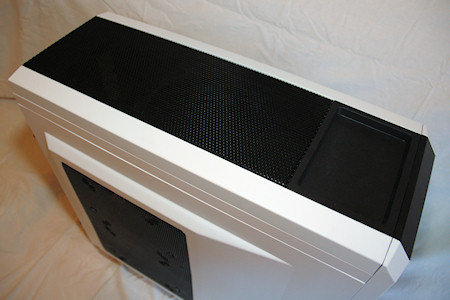 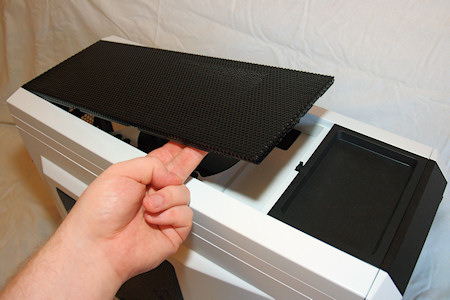 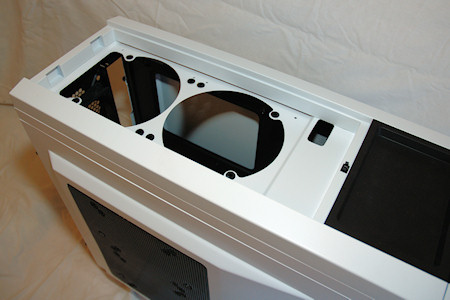 Rotating the case once more reveals the back where we find the usual stuff, IO-plate area, expansion slots and the power supply being positioned at the bottom. The exhaust fan can either be a 120mm or a 140mm and there is also four rubber grommets located below the fan for use if you use any external water-cooler. Are there any available today? 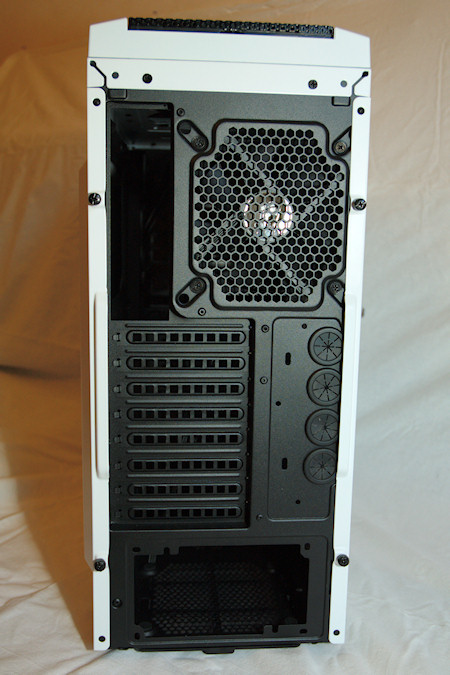 Popping the side panels off is quite easy with captive thumbscrews which stay in the side-panels to prevent the loss of them. On the inside of the left panel we see the 200mm fan installed. This fan can be removed in favor for two 120mm or 140mm fans. 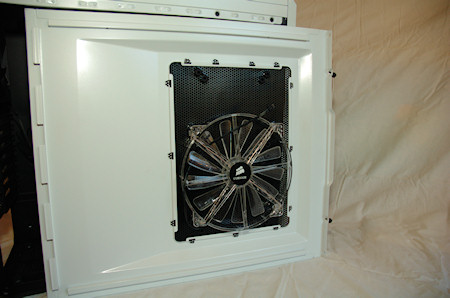 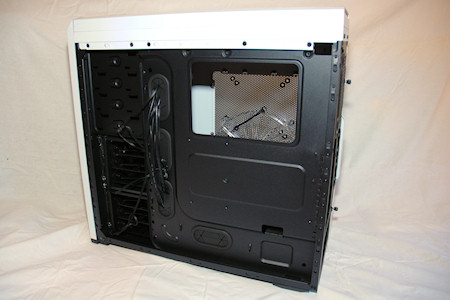 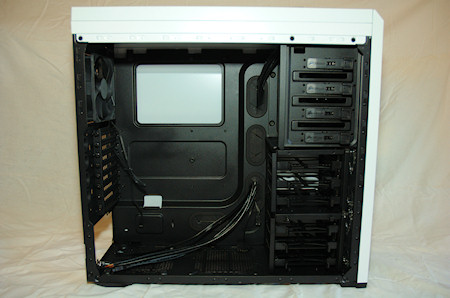 Finally we're inside the case and here we can see the two drive cages which can hold a total of six disk drives, either in 3.5 inch format or smaller 2.5 inch drives such as SSD. Both drive cages can be removed and used independently.

In front of the drive cages we also find the two 120mm white led fans. 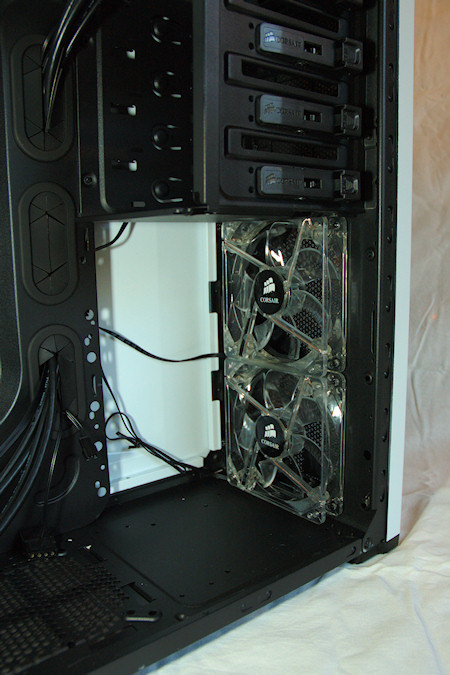 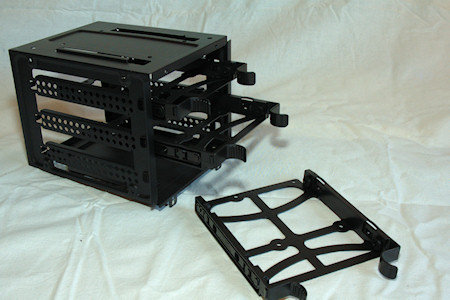 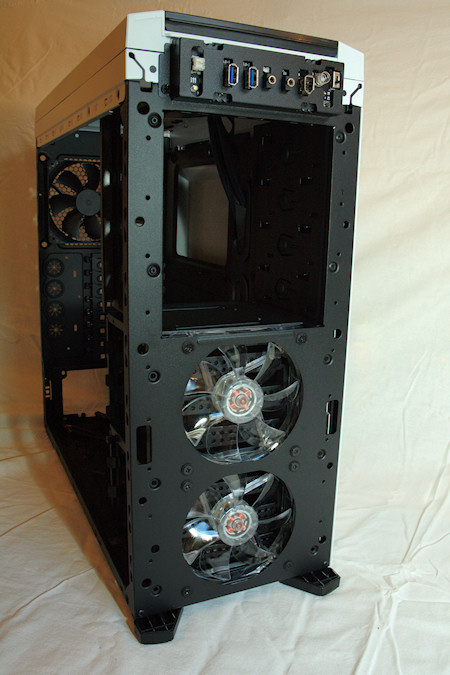 The 5.25 inch drive bays can be counted to a total of four, which should be sufficient for most today, unless you're an accessory geek with the needs of having multiple control panels installed. I've been one, I know what I'm talking about ;)

All 5.25 inch bays are secured with a simple push-pull locking system for very easy installation and removal of units.

If your power supply isn't one of those gigantic longer ones, you can also install a fan in the second, center slot. These two fan positions are also covered by a fan filter which can be extracted on the bottom back of the case for easy cleaning. 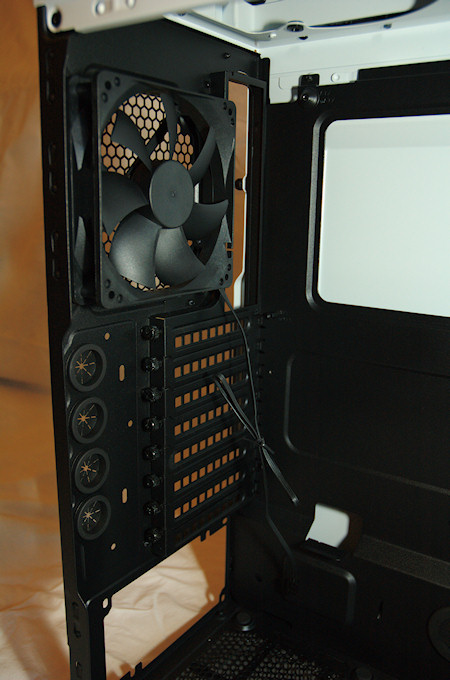 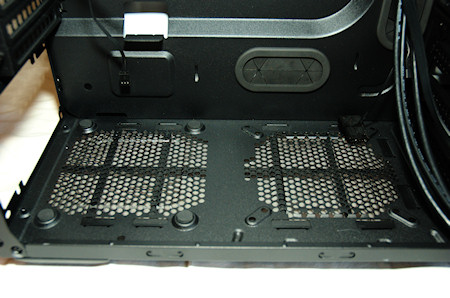 All we have left now is to install the test rig. 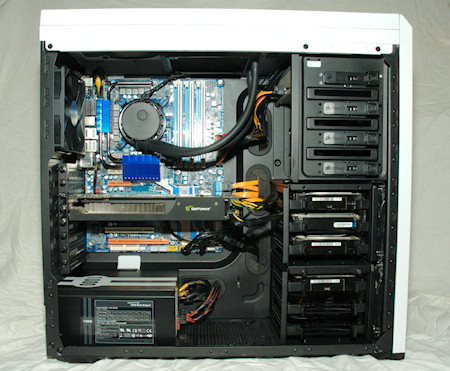 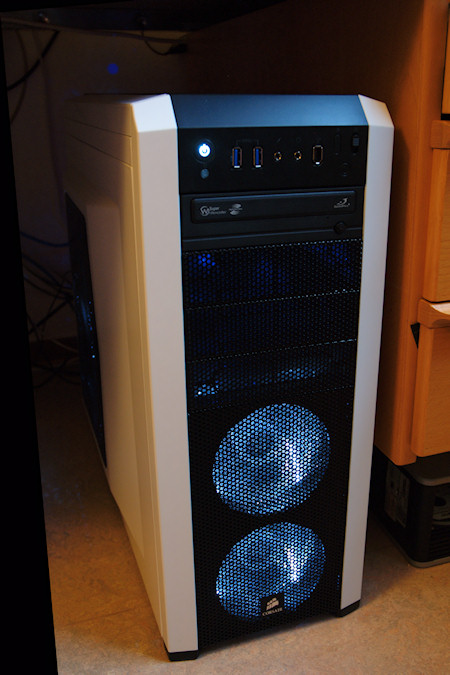 Finally, let's have a look on my conclusion for this computer case.
The Carbide 500R from Corsair surely is eye-candy with its beautiful white-black design and it's high-gloss finish. The white led fitted fans both in the front and on the side surely makes this for a stylish and perhaps also very suited winter themed case.

At least I get that feeling when looking at the case, it shines like something expensive and really beautiful. I can't say like diamonds, because I'm just another computer geek.

The overall feeling of the case with a black interior well thought through with smooth edges and nothing ugly in any way, surely makes this case worth both twice and three times its actual cost.

Corsair has brought a high quality and well working computer case to the market for only ~90 Euros. I can surely not recommend everyone to buy this case, because everyone would get tired to see it. But if every 1.5 person on the planet buy's it, it would be good enough ;)